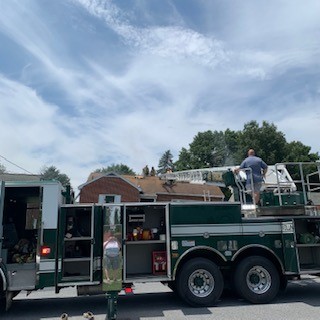 At 1:15 P.M., the Chambersburg Fire Department was alerted to 329 Glen Street in the Borough of Chambersburg, for a reported house on fire. While units were responding, Franklin County 911 Center advised that multiple calls were being made reporting fire coming from the rear of the home as well as unknown if the occupants were out of the home. Initial units arrived at 1:17 P.M. to find a one and a half story, single family home, with fire visible to the rear of the home on the back porch and inside the living space.

Fire department members rapidly deployed hand lines to the fire floor and began interior fire suppression efforts. Crews quickly contained and extinguished the fire on the porch and the fire that extended into the attic and first floor portion of the building. All of the occupants were outside of the home and accounted for upon arrival.

Due to the high temperature and high humidity, crews were rotated to prevent heat exhaustion. Two firefighter injuries occurred while crews were operating. One injury was due to a partial ceiling collapse causing a shoulder injury and the second injury was due to electrical shock from a compromised appliance. Both of these injuries occurred during fire suppression efforts and within the first fifteen minutes of the incident. These two firefighters were evaluated on the scene and did not require any transport to the emergency room. Currently, the fire is currently under investigation, but appears accidental at this time; Preliminary estimates of damage are approximately $200,000.00. The fire was marked under control within 20 minutes after arrival.

One resident was displaced and two pets were rescued by firefighters. Chambersburg electric, gas, and water departments assisted on the scene. This fire remained at a single alarm. Crews cleared the scene at 3:44 P.M.