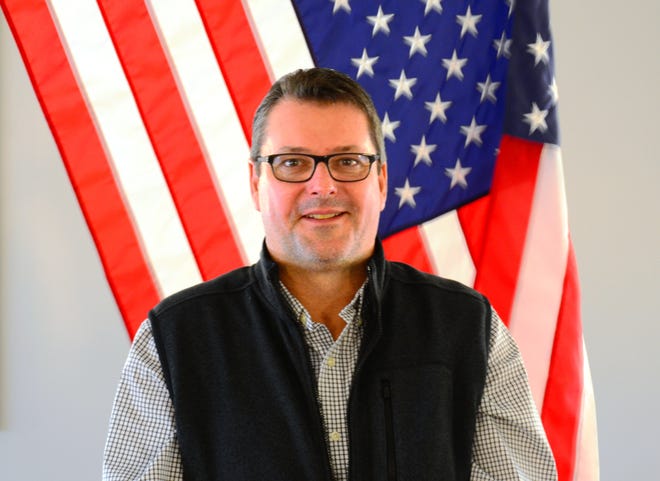 January 24 – John Flannery will be running for a second term as Franklin County Commissioner in May.

Flannery said, “Looking forward to the run. I know it’s going to be a big field. I expect there to be no less than five candidates on the ballot coming this May. It’s exciting.”

Flannery had promised a two-term run as a commissioner and he plans to stick to that.

He said, “My wife and I have pondered this for some time. We talked about it. I don’t do this because of some glorification of being a County Commissioner. I do it because I think it’s the right thing to do. I’ve maintained everything I promised that I would try and do for the citizens here in Franklin County.”

When asked why he wants to be a County Commissioner, he goes back to a saying he and his father discussed.

Flannery said, “Everybody’s heard it, but I don’t know if they’ve really thought about it. And that is if you give a man a fish, you feed him for a day. If you teach a man to fish, you feed him for his life. If you really think about that, the county provides human services. We do that through Aging, Veteran’s Affairs, Mental Health and Children and Youth. It’s important to me as a County Commissioner that I’m getting the fish from you, from the taxpayer. I play a huge role in whether I just give those fish away or I teach people how to fish. I’m the guy that tries to teach people how to fish. I don’t like just giving fish away. If I give it away one day, then I’ve got to do it tomorrow and I’ve got to do it the next day and I have to continuously do it. They’re your fish, man. They’re the fish in this community. I think that’s a big role that I play.”

If Flannery is voted in to be chairman of the commissioners, he will accept it.

The Franklin County Housing Authority held its first public meeting recently. They are a five-member board and had three new members at the meeting, one of whom was Flannery.

He said, “It was the first meeting we got together as the new board. They’re not associated with the county. They don’t report to us. They report to the state and federal government. We don’t directly lead them on a day to day basis.”

The Franklin County Housing Authority works with hundreds of people in the county. There are two different housing units – one in Chambersburg and one in Waynesboro.

The mission statement of the organization is providing homes to build hope and create neighborhoods. The vision statement is people thriving in vibrant communities.

Flannery said, “I think that I can play a pretty positive role in helping to accomplish those and kind of keep politics out of it.”

The goal of the organization is to give people some stability so they can move on in life.

At the first public meeting, the Franklin County Housing Authority nominated Flannery as chairman of the board.

He said, “I am excited about that.”

There were some tensions recently in the Housing Authority, but Flannery believes things are different now.

He said, “I looked into the financials. Everything looks on the up and up on the surface. I think we’re on a good pace. You have to understand the path forward before you look back.”

Flannery also spoke to the United Way of Franklin County recently where he will also be a board member soon.

He said, “They have near 20 different partners they work with, really reaching out, they do a lot with the community. I’m excited to be a part of that as well.”

Ice Fest begins on Thursday, which brings a lot of people to Chambersburg.

Flannery said, “I’ll be out and about. Hopefully I’ll get to see and meet quite a few people.”

Flannery is also the Vice Chair of the Franklin County Republican Committee where he recently decided to chair the Ben Franklin Society.

He said, “Which is the official fundraising group and society of the committee itself. Anybody that’s really interested in being a part of local politics and being a part of the Republican Party can give me a call, reach out to me. We’re trying to build the society.”

Membership of the society is $300 and includes a spouse or partner. It provides two free tickets to all events. There will be some mixers coming up for the society.