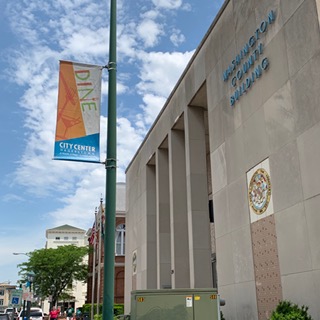 January 25 – With 11 items on the agenda for yesterday’s work session with Hagerstown Mayor and City Council, the group touched on a number of topics.

First was a presentation from Goodwill Industries about the Goodwill of the Valleys Community Project, which includes the community grocery store.

Wes Decker, Communications Officer from the City of Hagerstown, said, “They are seeking support from and partnership with the city. They do have some collaboration already with Meritus Health. So that project is underway. They were providing an update on that and seeking some support, partnership from the city.”

The Hagerstown Field House project was also updated with funding sources, a site plan, a construction contract and a lease agreement with Eastern Sports Management.

Decker said, “We have gotten many complaints on that. There is an issue I guess it’s seen two different ways. One by the city of Hagerstown and a different way by CSX.”

CSX presented some asks in a proposed agreement, but mayor and council found it unacceptable, so the group will be reviewing and revisiting the proposal.

The rental market and rent assistance availability in Hagerstown was also discussed.

Decker said, “Major increases related to everything certainly since we were pre-COVID. It’s hit all of us in a number of different ways.”

The Community Action Council talked about funding that is still available through their emergency rental assistance program. There was $22 million allocated to them initially, but are down to $3 million.

Decker said, “Seeing that there will be some sort of issue by June because all those funds will be gone.”

The Washington County Landlords Association also discussed what’s been going on with their increased costs.

Pat Ryan of NewsTalk 103.7FM asked, “What are you supposed to do? Mayor and Council, it’s not their role. This is reality. What were they hoping for out of this? Not the Washington County property owners. I’m sure they were saying butt out. If I’m them, this is market rate. This is what we’re facing and you can take it or leave it, but was the other side looking for Mayor and Council to put rent controls in the marketplace now?”

“No,” Decker assured. “This was just more of a discussion I think for the council to sort of gather information as to where things are now. They have received a number of emails and phone calls and letters from those who are renting saying look at how much our rent has gone up in the last six months, year, whatever it might be, but again, that’s tied to everything. They just wanted to gather the information.”

Mayor and Council will hold their regular session next Tuesday where the public is welcome to step up to the mic.