CHAMBERSBURG—It’s official. Chambersburg Borough Council has accepted the resignation of Amer Chaudhry and the board is seeking a new member.

Chaudhry, a downtown business owner who represented the borough’s fourth ward, has moved out of his ward and, by law, must resign, according to Borough Manager Jeffrey Stonehill.

“For the last three years, I have learned so much about our wonderful Borough of Chambersburg and it was an honor to serve as a council for the fourth ward,” Chaudhry said in an email to council. “My family and I moved yesterday to our new home in the second ward and the time has come for me to step down.”

“It was an honor to serve with Amer, and I look forward to a continuous friendship,” said Council Vice President Michael Herbert. “Please consider trying for office again when the time is right for you and your family.”

The board has until December to name a replacement to fill the remainder of Chaudhry’s term, which expires Dec. 31, 2021.

Chambersburg Borough elected officials receive a $4,125 stipend per year with no benefits, pursuant to state law.

Interested applicants must live in the fourth ward of the borough, which is situated west of Second Street and bordered by Commerce Street and approximately Queen Street and the Hamilton Township line.

Anyone interested in filling the seat must be age 18 or older and be a legal resident of the borough’s fourth ward for one year prior to appointment.

Applicants should send their resume and letter of interest to the Borough Secretary at: [email protected] or call 717-264-5151.

Council is expected to review applicants during the Dec. 14 regular council meeting. That meeting will be held at 7 p.m. in Chambersburg City Hall. 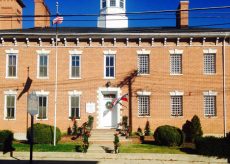