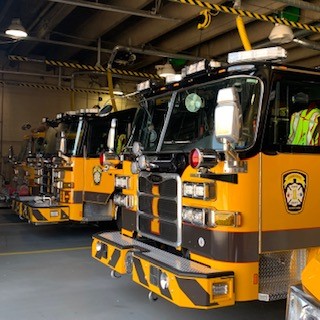 12 September 2022- In June, the shops around Norland Avenue ground to a halt when heavy carbon monoxide saturation was discovered at the Kohl’s store there. Luckily, Chambersburg Fire, Penn State EMS, and many other first responders jumped into action and prevented a worst case scenario. CFD Chief Dustin Ulrich issued a public statement to commend the men and women who helped out. Additionally, prior reporting on the event can be found here.

Every year, several thousand calls for emergency services are requested in the Borough of Chambersburg, ranging from medical issues to large-scale fire responses. Each day, our 911 dispatchers, fire and emergency medical services personnel, and hospital nursing staff within Franklin County do an amazing job serving those who live, work, and visit our area. Personnel who answer these emergencies have a natural affinity to help others without ever expecting anything in return, and in many cases, their exemplary duties go unrecognized.

Among these emergencies, there are some instances where a call could have had a different ending if it was not for some quick thinking of the first arriving crews.  Today, the Chambersburg Fire Department was able to show appreciation to personnel that were present on a day where the first arriving crews made a seminal difference.

On Thursday June 23, 2022, at around 9:30 a.m., Penn State Health EMS department was dispatched and responded to 955 Norland Avenue, Kohl’s Department Store, for a report of an unconscious patient. The Chambersburg Fire Department was requested and arrived on the scene at 9:46 am. Upon the fire department’s arrival, the store was in the process of being evacuated. During the initial investigation, firefighters encountered carbon monoxide throughout the entire occupancy with levels exceeding 280 parts per million in most portions.

While the search was being conducted, additional fire department personnel started to evaluate and triage the staff that were present. Emergency personnel quickly indicated that there numerous patients and additional basic and advanced life support EMS units were requested to respond. In total, there were 28 individuals medically evaluated on the scene. Of those, 15 were transported to Chambersburg and Waynesboro hospitals for high levels of carbon monoxide present in their body. One patient was transported to a specialized hospital for further treatment and was subsequently released after treatment.

Emergency personnel constantly train and prepare for incidents and try to project the unknowns.   Events with such a high number of patients as this incident are a rare occurrence, and can easily task responders and diminish resources if the proper initial actions are not taken.  The exemplary work, and out-of-the box thinking, by all involved that day prevented many from becoming more critically ill and led to a successful outcome.

We would like to thank Franklin County Commissioner David Keller and Commissioner Robert Ziobrowski for being present for today’s recognition and for their kind words to all emergency personnel.

The following individuals were recognized: