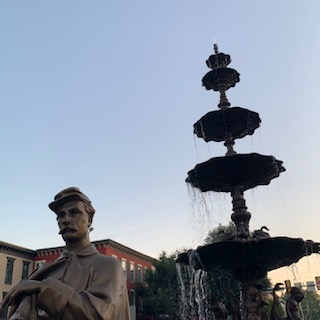 August 23 – The Chambersburg Borough Council meeting last night saw a number of topics up for
discussion.

Allen Coffman, borough council president, joined First News this morning for a recap of the meeting.
A new firefighter for Chambersburg Fire Department was approved. He will go to HACC for training in
Harrisburg in September.

Council approved an Emergency Services Incident Cost Reimbursement Program for the fire department.
About 800 fire departments across the country use this system.

Coffman explained, “What it does it bills people for items that happen, for instance, auto accidents, auto
accidents with people trapped, structure fires. There’s a way to recoup some of the costs of those
incidents when they happen.”

Estimated projections suggest the program could bring in between $40,000 to $50,000 a year for the
borough.

Coffman said, “It will help offset some of the costs of the fire department.”

Inspector Meredith Dominick talked to Council about accreditation for the police department.

Coffman said, “A couple things it means to me, it reduces agency risk and exposure to lawsuits and it
also might decrease some liability insurance expenses. Beyond that part of it, even to me, it would
maybe open up some doors for some Pennsylvania grants for police department equipment and things
like that. I’m really looking forward to that part of it. It should help us.”

For an idea of the importance of accreditation, there are 1,117 police departments in PA. Of those, there
are only 142 agencies that are accredited. Waynesboro Police Department is also accredited.

Coffman said, “I know she’ll work very hard on getting this done. I look for the benefits that we’ll get
from it.”

Coffman said, “As I said last night, if you get one grant, you’ve paid for the cost of your accreditation. It
could very well lead to improved rates on our liability insurance. There are some other benefits,
certainly, and making the department even more transparent than it is now. And as you know, the Chief
is all about transparency and working with the public. So, it’s going to be a good thing.”

One comment from the public came up about downtown parking and feeding the meters. The
suggestion was, parking should be free.

Coffman said, “Obviously they’ve not been to some of the other towns. They find out that 25 cents an
hour is a bargain. I think in Harrisburg area, if I remember right, the last time I paid up there it was $3 an
hour. You’ve got to do that. You need turnover downtown and there’s not much money made from it.”

Coffman reminded there are lots where parking is free, although the walk is longer.

A report from the Electric Department showed that there will be no rate increase for residents in 2022.
More power on the market will be purchased in October.

Coffman said, “I think when we get to that buy, we’ll find out where the market is going, if it’s going to
stay about as it is now or if it’s going to continue to go up. That will have a lasting effect on what will
happen in 2023.”

Transformers are in high demand throughout the United States. In fact, some areas have had to actually
stop building homes because the municipalities just can’t get transformers.

Coffman said, “I found out last night we’re sort of in the same way. We’re working toward a transformer
shortage. We’re okay now, but we don’t have a lot of these items around.”

In terms of the Water and Sewer Department, there will not be a sewer rate increase for 2023, but the
water rate will increase by 5 cents per unit, which will take it to 22 cents per unit. A unit is just under 75
gallons.

It will likely be an increase of about $2 a month for the average home owner.

There is also a shortage of water meters nationwide. Chemicals used in water treatment have doubled
in cost since 2018.

Coffman said, “We’ve got all kinds of stuff here that’s affecting us that’s happening nationwide. So,
expenses are up.”