BEHIND THE NEWS: Could you make a life-or-death decision in under a second? Why would they shoot someone in the back?! And how come the local news doesn’t have a report? I have the answers after training at the Pennsylvania State Police Academy 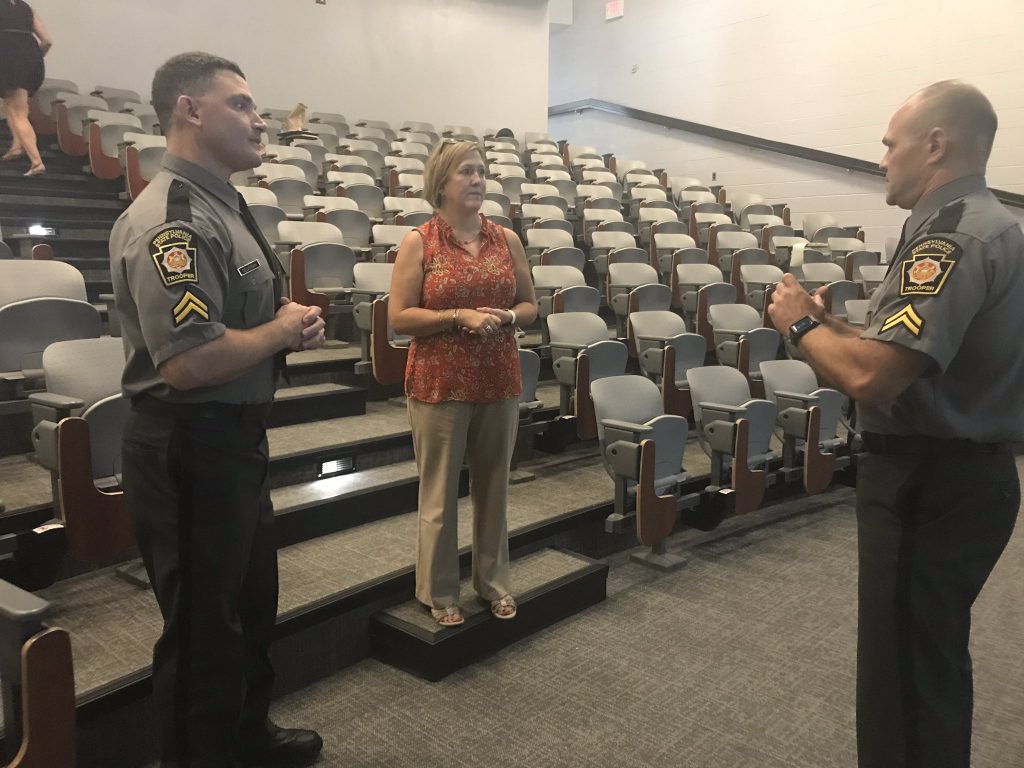 Imagine finding three men, probably in their late 20s, harassing women on a sidewalk. As you approach, one begins yelling at you, while his two buddies stand behind him. You tell him to calm down, ask him what’s going on, but he keeps yelling. You are focused on the mouthy guy, hoping to get him to shut up and move on that you don’t notice his buddy reaching into his jacket. A gun goes off. You are hit. It’s over.

That was my first experience in a simulator during media training on police use of force at the Pennsylvania State Police Academy in Hershey.

NewsTalk 103.7 FM was one of more than two dozen media outlets invited to attend and my colleague, Ryan Hedrick, and I were very excited to go.

The goal of the day was to enhance the relationship between the community and law enforcement by exposing us, as reporters, to an element of law enforcement which receives heavy scrutiny and is complex and often misunderstood.

We all hear about the police using force, whether we write about it as reporters or we watch it on TV while sitting in our living rooms.

But trust me. It’s not at all what you think.

In my use-of-force simulation, I was virtually killed before I figured out what was happening.

When I viewed the playback, I realized I missed seeing a lot of action going on behind the mouthy guy because I was so focused on him and, just “that” quick, I was hit.

I had two more chances in the simulator. I was shot again the second time but controlled the situation on the third try.

I’ve been a journalist for more than a couple decades, so I’m pretty used to walking into unfamiliar situations and I’m fairly observant, but I did not see those shots coming.

As I stood there in front of nearly a dozen law enforcement officers, I thought about what they experience every day.

You get dispatched to a scene. You have very limited information on what’s happening and it’s only from the vantage point of the caller.

You really have no idea what you’re walking into.

Think about it, most times people call 911, they are in a desperate situation. They feel threatened and need help.

According to Sgt. Tim Fetzer, unit supervisor with the Use of Force Unit, the No. 1 reason cadets say they want to become a police officer is because they want to help people.

They are called to situations and they are there to help, but their first task is to figure out what’s going on and how best to diffuse the situation.

“We don’t want to increase the volatility of the situation,” Fetzer explained.

Unlike me, state police officers have been specially trained to assess a situation—quickly. They have to figure out what to do and when to do it in literally less than a second.

One officer compared it to a driver behind the wheel in traffic and the car in front of you throws on brake lights. You have to make a very quick decision on how you will react, and that reaction typically comes from your previous experience and what you believe is likely to occur.

But as a law enforcement officer, you have the benefit of extensive training, behavioral science research and rules to follow in every situation.

“As a police officer, you are gonna think a little differently than the basic citizenry out there,” Fetzer said. “We are constantly watching body language … threat clues.”

Sometimes, de-escalation of a situation isn’t possible and police have to use force—and they are the ones responsible for that judgment call based on their knowledge of department Use of Force policies, the PA Crimes Code and legal precedence set by civil court rulings.

When determining whether to use deadly force, PSP troopers are taught to consider ability/means (Does the person possess the ability and/or weapon to carry out a threat?); opportunity (Is the person with ability within striking distance to carry out threat?); imminent threat (Has the person taken a significant step towards carrying out threat?) and preclusion (Have less lethal alternatives been excluded as options before resorting to lethal force?).

Let me pull over here for a moment and run a background check.

You watch the news. You may believe police use force frequently during criminal arrests, but that’s just not so.

A two-year study released in 2018 showed less than one-tenth of 1% of the total incidents reviewed resulted in an application of force. Read that again. Less than 1%.

In that same study of over 1 million calls and 114,000 criminal arrests, the vast majority of incidents of force resulted in minor injuries and only one death attributed to use of force.

The perception that police are using force in the majority of arrests is false.

That’s one of many common misconceptions I learned are untrue.

I also discovered how little time officers really have to respond to a situation and no, just because you are trained doesn’t mean you can accurately predict what will happen in any given situation.

That got real for me when I was so focused on the one man in the shooting, but not the other two.

I also learned police are not required to use minimal force.

I asked why a taser can’t be used instead of a gun.

I was told tasers are only effective within about nine to 15 feet from the subject and then only accurate if at the proper angle and even so, might not stop a perpetrator.

I suggested to an officer that he fire off a warning shot or shoot a guy in the leg, rather than the back, before potentially killing him.

But I was told that isn’t realistic.

“You don’t want to just put out minimal force. It has to be objectively reasonable,” Fetzer said. He said a warning shot could cause more chaos in the area and the goal is to stop the perpetrator. If you shoot him in the leg (which is, by far, a harder shot to make especially when a guy is running), that won’t necessarily stop him from shooting.

My analysis of it is if a guy is firing in a school, do you want to shoot him in the leg in an attempt to stop him?

Which brings me to the whole, “he was shot in the back” outcry.

I always wondered why you would shoot someone who is running away.

Again, thanks to the training, I saw real-life cases where criminals were in fact running away and they held a gun behind themselves and fired and were surprisingly accurate in their aim.

Further, if a criminal is walking away from a police officer who is telling him to stop, he’s obviously not going to stop no matter how many times you tell him to. Maybe he is going to get a weapon or maybe he is intent on completing a mission of harm to someone else, if not the officer.

I liken it to a 2-year-old—something bad could result and it’s your job to stop him from harming himself or others.

To put it bluntly, if you were a community member standing by watching an arrest attempt and the guy started yelling and walking away, would you want the officer who is there to protect the community to just turn and walk away or would you want him to stop the guy by any means?

The @PAStatePolice use-of-force seminar in Hershey continues. We will have a full recap on #TheDrive at 5:00. pic.twitter.com/RLtYHuVmpg

Finally, we learned that a video or initial news report of a situation is likely to show only one aspect of a given situation. It’s just a small snippet of a moment in time.

“Simply looking at a video may not be what happened from the officer’s perspective.” Feter said. He said when an investigation is conducted and they have video footage from a police camera, for example, they break down that footage frame by frame and it can take hours to get a real picture of what exactly occurred.

That was also a wakeup call for me.

As a member of the media, I get so frustrated when an incident takes place and I call the police to ask for a report on it and I am left waiting for hours or days.

They cannot give out inaccurate information. They have to wait until they have details confirmed.

I get that. I don’t want to risk my credibility by putting out unverified information either. I would rather have it right, than have it first.

So many things I learned in just four hours.

I wish everyone had the opportunity to experience what I did. I wish more members of the media would have attended, since it is our job to understand so we can accurately share news with the community.

Speaking of which … What can you do to help law enforcement?

Anytime you converse with a law enforcement officer:

Thank you to the members of the Pennsylvania State Police who put together the event and patiently responded to our endless questions. Feel free to post any video of my pathetic attempts in the simulator in your lunchroom for daily amusement. I sure don’t envy your job!

Andrea Rose is editor of Tristatealert.com.